In my previous post (here) I tried to explain how bar-model supports learning using dual-coding. In this post, I want to use Cognitive Load Theory to explain that bar-models  reduce cognitive load. (I should point out that as of now, I have no research evidence to show that using bar-model leads to improved long-term learning and improved problem solving – but I’m working on it). 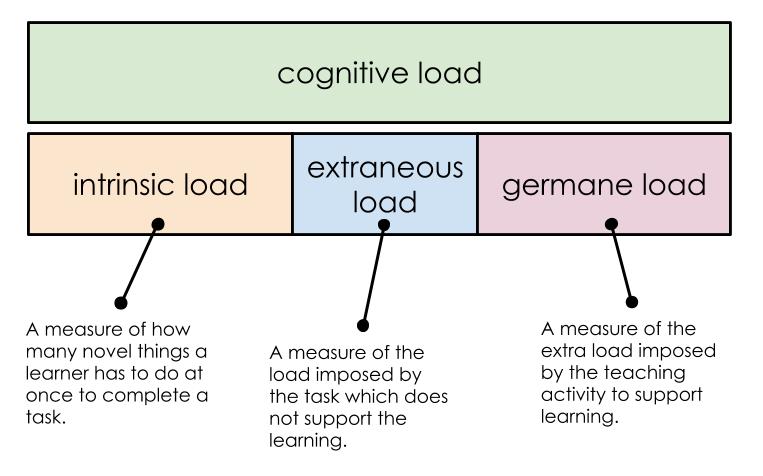 This diagram represents the three elements of cognitive load (I’m referring to the book Efficiency in Learning, Clark, Nguyen and Sweller – 2006).

Intrinsic load is the difficulty imposed by the task. In a multi-step science question, the intrinsic load is high – the learner has a lot to hold in her head at the same time. The teacher can reduce intrinsic load, for example by breaking a complex task into smaller steps.

In this post, I argue that algebra, the gateway to understanding the universe, increases intrinsic load when a learner hasn’t mastered it. If a learner has to concentrate on interpreting the algebra, the intrinsic load is increased. She will struggle to learn because the overall cognitive load is too high. I believe this is a core barrier to learner success in science.

Using a bar-model reduces the intrinsic load because it replaces un-mastered algebra with a visual representation.

For example, you can reduce the intrinsic cognitive load of a latent heat/specific heat capacity question by representing the overall problem as a bar-model (thank you @ruthyie ).

Instead of using working memory to interpret the algebra:

the learner is provided with a visual representation of the algebra, with a reduced intrinsic cognitive load.

After Easter I will be asking for volunteers to carry out a bar-model experiment with their classes to test for long term retention. If you would like to take part, please contact me.

18 years secondary teacher: 4 years primary. MA in SciEd, member of IoP (serving on the Education Committee) and Chartered Science Teacher. Author of 'Big Ideas of Physics and How to Teach Them.' Director of Curriculum and Pedagogy for Paradigm Trust. View all posts by BenRogers