It seems reasonable to suppose that if the Earth has a fitting and appropriate attractive potency it will also have a potency of repelling things that might be dangerous or disagreeable to it.

Otto von Guericke was an extraordinary engineer. He is famous for inventing the vacuum pump (and disproving ‘nature abhors a vacuum’ – a pernicious error of the ancient Greek philosophers – Aristotle this time).

In 1654, Guericke used his pump to evacuate the air from his famous Magdeburg Hemispheres. These are two hollow hemispheres placed together and the air inside them pumped out. 16 horses were unable to pull the hemispheres apart – the most dramatic and famous physics demonstration of all time. 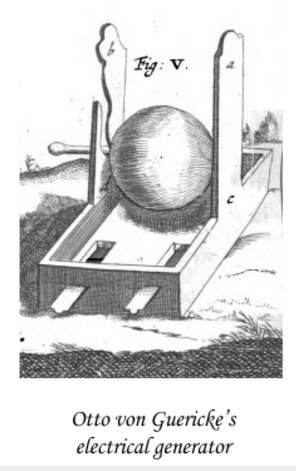 Nine years later, Guericke invented the apparatus that unlocked the electrical phenomena of the next century: a powerful generator. It was a ball of sulphur which could be rotated. When the operator places a dry hand onto the rotating sphere, the sphere became charged. Dry human skin is especially effective (Guericke commented on his own hands: dry, cracked and rough) though other materials, including wool and leather, also work very well.

The apparatus was made by blowing a glass sphere (“about the size of a child’s head”) and using it as a mould for molten sulphur. When the sulphur solidifies, the glass is broken producing a hollow sulphur ball.

Guericke was the first to make an electrical discovery using his sphere. It was the first of many. Even though the sulphue sphere was unreliable to use and expensive to make, electrical philosophers across Europe hurried to build their own. One experimenter stopped at the glass mould stage and tested the glass sphere instead. It produced charge even more effectively than the sulphur.

Some say Isaac Newton invented the glass globe generator. If so, it was a small development, and the only useful thing he did for electrical philosophers. Otherwise, he was jealous, spiteful and disagreeable, especially to Stephen Gray, the hero of the next chapter, with his spinning Guericke globe and his dangling boy.

18 years secondary teacher: 4 years primary. MA in SciEd, member of IoP (serving on the Education Committee) and Chartered Science Teacher. Author of 'Big Ideas of Physics and How to Teach Them.' Director of Curriculum and Pedagogy for Paradigm Trust. View all posts by BenRogers